Primeval: New Blood is an alternative series of Primeval that takes place after Series 4, written by Styracosaurus Rider.

All pages relating to this series have (NB) in their article name.

The anomalies are growing. They are occurring more frequently, and lead to even more dangerous times. But this is just the first step:

Because they are being exploited. Something is modifying them, changing them, morphing them to their own desires. And it will come to pass that the most dangerous time of all is not the past, not the future...

...and not even the present. 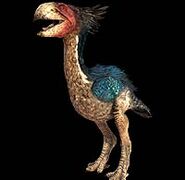 Promo of the Forest of Dean from Episode 1.1

Screenshot of a Future Predator for Episode 1.3

Lakeside Park, the setting for Episode 1.4

Promo for an as-of-yet unidentified carnivore to appear in Episode 1.7

Community content is available under CC-BY-SA unless otherwise noted.
Advertisement